A Little Boy Who Lost His Mom

As you can see by the drawing of one of my students, I will call him Sibi, a 5yr old boy who lost his mother at the end of 2013, sadly he doesn’t know his father and he now lives with his aunt. If you look at the drawing of his house compared to my other kid’s drawings, you can immediately pick-up that this little boy wasn’t coping well with the loss of his mother. His house is incomplete compared to the other drawings of his class-mates. I guided the children to draw a house and told them to add anything that they would like to add such as their family, animals, trees or flowers. This little boy’s house is empty and not very colourful and if you look closely at my class photo, you can only see his two little eyes circled in the back ground. It clearly showed how withdrawn he became and would probably need special care, guidance and support so he could have a good and prosperous future one day.

This is why it is so imperative for us to get financial assistance, so we could provide the necessary means these children and teenagers need to thrive and to help in building up our drug infested communities that are ruining our children’s lives. 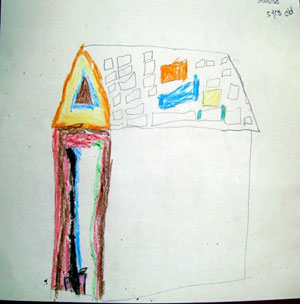 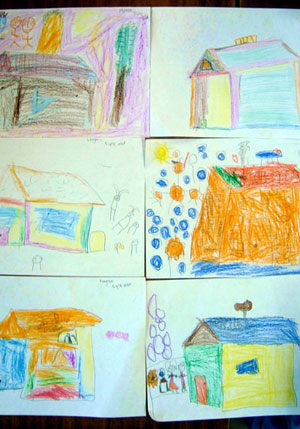 In this lesson I was teaching the kids about triangle, square and rectangle shapes and turning it into a house. With this specific lesson one can observe children with emotional problems or the ones coming from abusive or broken homes and the environment the house is located in. House drawings are usually more informative and can tell a therapist more about the child’s family life within and outside the home. Children tend to naturally invite stories concerning their home life, who lives with them and the type of neighbourhood they come from when they are asked to explain more about their drawing. Houses are an effective way to understand children’s interpersonal relationships and embodies a child’s impression of family life. It is also less frustrating to draw than human figures. 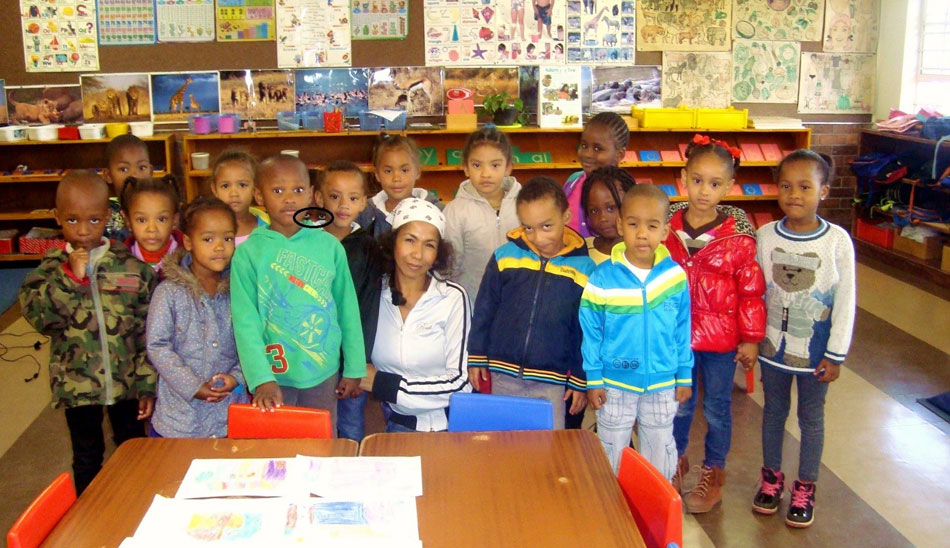 If I also compare Sibi’s drawing of his fish below to my other children’s drawings, I could see the same pattern. He produced incomplete work and only a qualified art therapist will be able to help him and so many other children in similar situations to deal with their emotional trauma or abuse. But once again, the only way we can achieve this will be through the help of sponsorships or donations so that we can grow this project, get all the proper supplies we need and to employ qualified competent staff.

There are tons of children like Sibi that needs our help. His at a very tender age of five and may later develop more emotional and social problems which could be devastating to his future and lead to severe depression and a sense of worthlessness or abandonment issues may over-power him unless he gets the proper support, guidance and encouragement he needs.

However, I must admit I’ve seen a vast improvement in Sibi’s social behaviour since his embarked on art lessons. He seems to be more confident, plays and laughs more than he did at the beginning of this year 2014. This could be because he gets individual attention from me when we draw and I allow him to express himself freely and talk about what his going through. I suppose art has been a good distraction to him for everything that he has been through.

SIBI’S DRAWING COMPARED TO THE REST OF HIS CLASSMATES BELOW, IS NOT THAT COLOURFUL 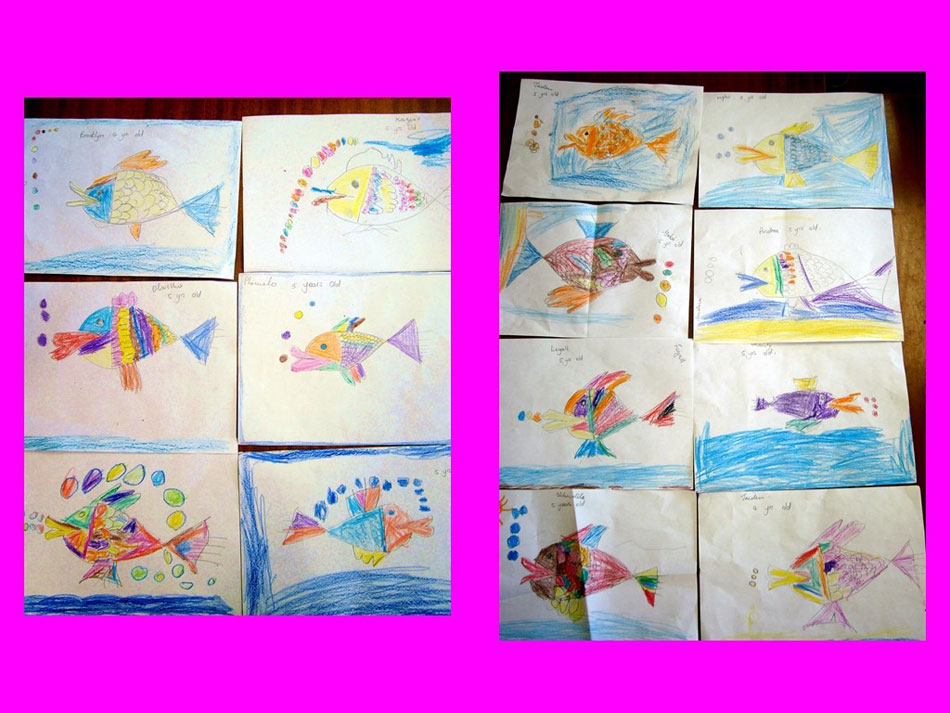 I’ve attached a picture of his drawing below where he finally opens up and draws a stick picture of his mom and dad and of a spider which could be a representation of a fear of some sort. When we discussed the drawing in more detail, it became quite evident that he hasn’t grasped the concept that his mom is no longer coming back and the absence of his father has had a negative effect on him. He longs for a father he never had the privilege of knowing. After speaking to him about the loss of his mother and explaining to him that she’s in heaven watching over him and that she’s always by his side but he cannot see her, he seemed to have absorbed that little positive information to help him cope with the idea that his never going to see her again but takes comfort in knowing that she’ll always be there with him in spirit. All this was accomplished by me taking time to teach a little boy how to escape from the harsh realities that’s plaguing him every day, merely by expressing himself by creating art.

Sibi’s drawing indicating his mother and father circled in brown. To us, this looks nothing like a mom or dad, but to a little boy, this is his expression of what he thinks about and his way of bringing it across. The spider in blue is also circled. We can also note that he makes use of more colour which signals an improvement in his behaviour. I could assume his healing and adapting better to his circumstances because his learning to express himself better and to talk about things. 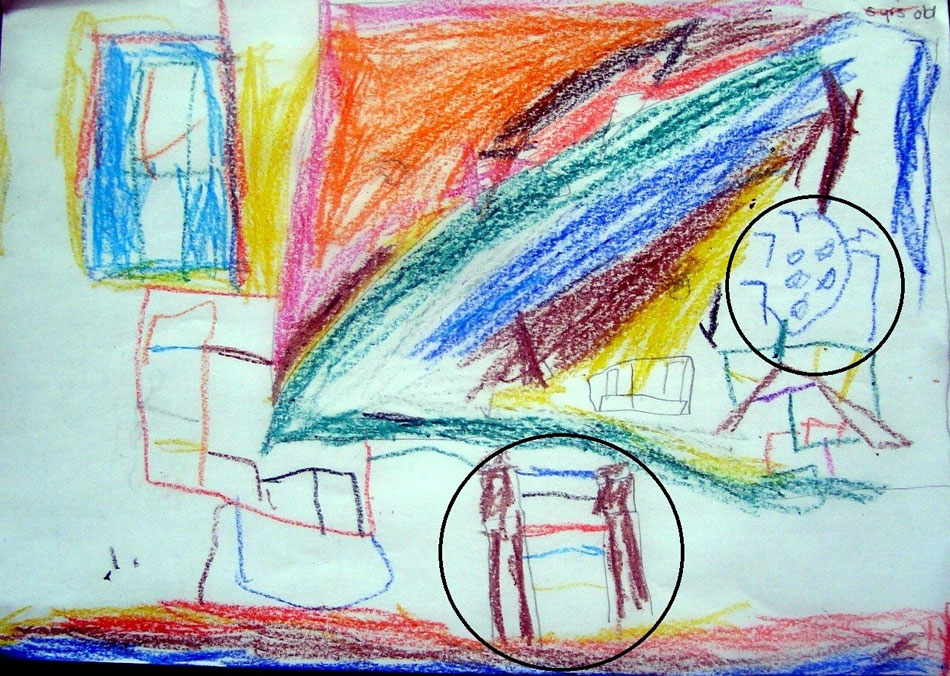